If you’re not sure what this post is about head to my previous post and have a read of that first, then come back here.

I will try and get into the habit of loosely planning out the whole weeks worth of activities, so I have plenty of time to prepare, but organising each activity the evening before or during the day.

Our theme for this week is ‘On the Road’, Aidan loves vehicles and so this was a fairly easy theme to get started with.  I started by writing down a few activity ideas that I can use throughout the week. I wrote down anything that came to mind, from messy ‘Tractors in the mud’ to really simple ‘Pointing out cars on the way to the shop’.  This helped me to see that even the simplest, most every day activities could be a source of entertainment.

Today was off to a bit of a funny start because Aidan woke up early and so he needed a nap by 9am… So we got the day started properly at 10am with some outdoor play.

I put his ball pool out with some cars in and his bike. Mostly he just wanted to be chased but we did spend a little bit of time using the cars to push balls around and rolling cars as far as we could with one push.  He also had his snack outside which isn’t usual so i think he enjoyed that. 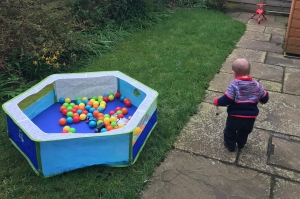 Then we went for a walk to the charity shops in the village, I wanted to try and pick up a few things that would help me with future activities and on the way we talked about what cars we could see.  I’d asked Aidan before we left what he thought we might see and he wanted to see a tractor, I told him I didn’t think we’d see a tractor but I was wrong! He spotted it way out on the main road and was very excited to point it out to me.

When we got back it was time for lunch, while daddy and I put a few bits together Aidan played by himself. After lunch we put him down for his nap.   The morning nap was 100% required but totally screwed us up for his afternoon nap.  He ended up chatting and singing to himself in his cot for 30 mins or so, long enough for me to clear away all the mornings toys and set out a few new things for him to play with (and put my feet up for 10 minutes with a cuppa). 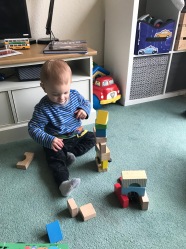 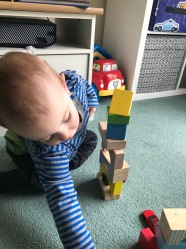 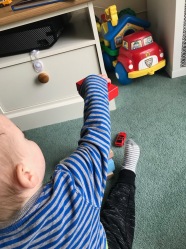 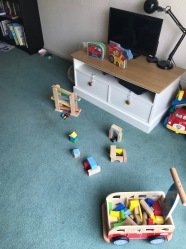 We spent the afternoon building towers and running cars down tracks, two toys he rarely gets out on his own.  We read a couple of books and talked about what we could see in them.  At about 3 we went back out into the garden to play with a ball and some larger push along toys.  I had hoped he would entertain himself a little so I could wash the dishes but he wanted to play together so we kicked the ball around and he had his afternoon snack.  Getting him back inside was challenging, he wanted to play on his bike and be chased some more but it was getting cold and I was starting to get a bit stiff so I tempted him back inside telling him he could race his bike around while I started tea. Daddy to the rescue at this point, we have a running stroller and Aidan loves going out for a run with daddy so they went out while I made tea.

We played quietly with bricks once we were done and then it was time for his bedtime routine. The day flowed quite naturally, I had quick and simple activities up my sleeve in case we ran out of steam on something so it’s nice to have those in the bag for another day! 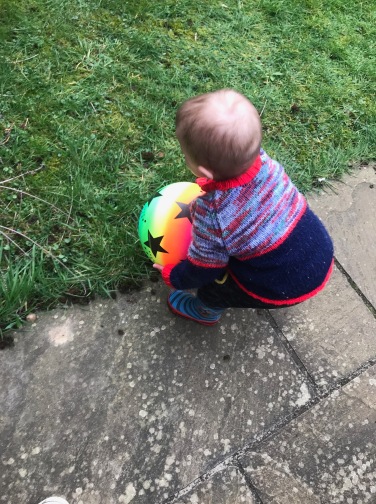 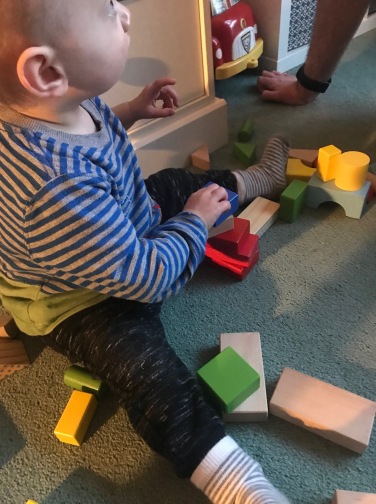 Tuesdays and Wednesdays he goes to a childminder and all being well he will be able to do that as normal this week. I will plan another couple of days of activities on our theme and hopefully that will see us through the week. I guess we’re going to be taking each day as it comes for now, trying to keep as much normality as we can until things change. It’s nice to feel prepared though and getting into good habits early will help us later.

One thought on “On the Road – Day One”