I want to start of by saying that this topic and my story are, of course, very personal.  I have struggled, not only physically but mentally with breastfeeding.  Please be respectful of the decisions I and my husband made.

As part of World Breastfeeding Week 2018 I’d like to share with you our breastfeeding story so far.  I can see there being three parts to this story, hopefully the first two will be this week and the final one will come in a few weeks.  The second part will cover breastfeeding and mental heath as I have experienced it. This post will be our journey up to today.

Today Aidan is 6 weeks and 2 days old.  We have an appointment at the tongue tie clinic to, hopefully, have a tongue tie division.  But I’m getting ahead of myself.

Within an hour after Aidan’s wonderful and beautiful birth I asked the midwife if I should try and feed him.  First we tried a cross cradle hold as this felt the most natural.  My midwife was very supportive and gave me a few tips but Aidan didn’t seem interested. Vicki (the midwife that had taken over after his birth) suggested we try lying down.  I managed to get him latched for only a few little sucks.  He was considered a ‘reluctant feeder’.  He was born at 0640, this first little feed was probably around 0715.  He didn’t eat again until much much later that day.

For various reasons that I’ll talk about in a different post, we were separated around an hour and a half after his birth, and between me being away from him and him being away from me we couldn’t have any more skin to skin until after lunch time.

At no point was I prompted or encouraged to try and feed him again.  Of course I’m aware that he’s my baby and I need to feed him but in retrospect I felt unsupported in the early hours with breastfeeding.  He was known to be reluctant to feed and we had had trouble with latching, I’m very surprised no one came to see us try again.  It wasn’t until we were on the ward that I tried again to get him latched.  It became apparent at the point that it was going to take some time to get him feeding from the breast and so I was encouraged to express into a syringe* in order for him to get the colostrum.

Very late on his first night he was taken to NICU where he spent around 24hrs.  In the morning I didn’t get to him until 11am, I was given some support by the NICU staff to try and get him feeding but again in the end I expressed into a clean syringe for him.  The staff suggested trying to use a machine to express so that we could get a little more into him.  We still used the syringe to give it to him, but this way he was getting close to 5ml a feed rather than 1ml here and there.  Andrew and I were so proud when I started getting serious amounts of colostrum.

Once Aidan was taking around 10ml they suggested we use a cup to feed him instead. Feeding more than 10ml with a syringe isn’t very practical. The cup is just one of those small plastic cups they dispense medication in (a clean one every time).  Its a little bit squishy and your baby kind of laps the milk up like a cat would. It’s a bit scary to do as there is a risk they could breath it in and asphyxiate.  I think I only managed to cup feed him once and not very successfully. Not all the staff were happy for me to syringe or cup feed him unattended and some didn’t want me to cup feed him at all and so they would do it.  The number of different people who had fed him in his first few days was somewhere in the region of ten.  We were told in our parenting classes that the number of feeders should be kept as small as possible. Ideally, in a non breastfeeding situation, it would be no more than mum and dad. 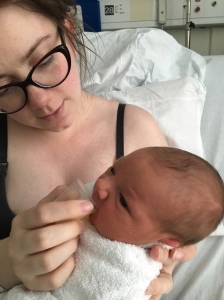 This, along with a very hungry baby, led us to the decision to formula feed him on day 4.  We were warned of nipple confusion and told he might not ever latch if we started with a bottle, but we had seen no progress with breastfeeding and they wouldn’t discharge a baby that was only cup feeding.  I continued to express and we topped up with formula, he very rarely had more formula than expressed breast milk.

This decision was so hard and so easy to make.  Breastfeeding him was so important to me but he needed to eat and we needed to go home.  After a quick trip for Andrew to pick up everything we’d need for expressing and bottle feeding at home we were discharged after 5 days in hospital.

Expressing is hard work, I felt like I was doing it constantly, and it was really tiring.  Expressing took about as long as feeding him would take so it could take me an hour to express but then he’d drink it all in seconds. If people visited I would take myself off to express, sitting alone for an hour every 2 or 3 hours while we had visitors was pretty grim.

After talking to a few friends and getting some advice from other mums on Instagram, we contacted a lactation consultant and asked her to come out to our home to give us some advice.  I just needed to know if I was ever going to breastfeed him, I was still trying and by this point it was just upsetting me and Aidan.  I needed to know if it was worth pushing through or whether it was going to be better for both of us if I just accepted it wasn’t going to happen.

The day before we saw the consultant I spoke with my midwife. I asked her if she had any more suggestions for me. She said that at that point it might be worth giving nipple shields a go. There’s still a risk of nipple confusion but he was already using a bottle so he was likely already confused if he was going to be.

On the 28th of June I sat down with him to try the nipple shields, I was fully expecting it wouldn’t work, at least not first time.   He latch immediately with no problems and had his first proper breastfeed at just over 2 weeks old.  I cried, I was so happy to be feeding my baby boy the way I’d dreamed of.  That night he fed mostly on the breast with the help of the shields and only had a bottle on one occasion.

The following day our lactation consultant came round and she was fantastic, she was so supportive of our decision and felt fairly positive there was still a chance he could feed without the shields in the future.  She referred us to the tongue tie clinic because of a mild tongue tie (which, I might add, we’d been told by a midwife he didn’t have).  The LC recommended waiting until his tie had been cut before trying without the shields, she thought he might find it easier and it would be less painful for me.  When she left she said to try and not give him a bottle unless we really needed too.  I think he had 2 bottles over the few days that followed and since then we have packed them all away.  I did try him on my breast a few times and on occasions he was feeling co-operative we were able to get a good latch and even have a few sucks. 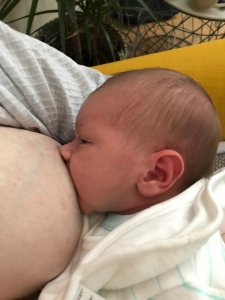 There are definitely times when I find the shields frustrating and want to pack them in and go back to bottles, but all in all they have improved our day to day life.  I feel able to go out for the day, not needing to worry about finding somewhere to express and storing milk.  The shields still needed to be sterilised so sometimes things can get a bit frantic if I’ve been a bit disorganised but we’re getting into a pretty good routine.

I plan on doing a follow up post once we’ve had time to see if there’s been an improvement after his division. 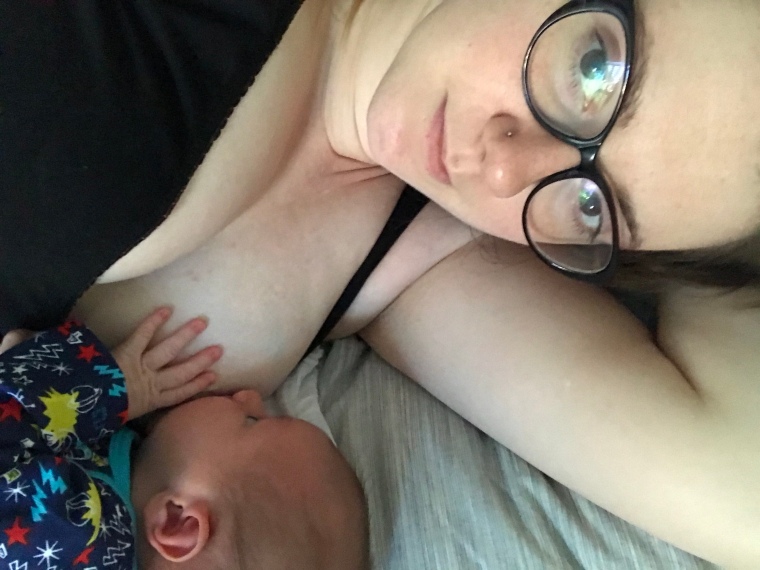 *I was doing this by hand, sucking up any little drops from my nipples with the syringe.

One thought on “Breastfeeding Journey – Part One”